These bruschetta were the hit of Sunday night's supper and I feel a little guilty since they are really made from leftovers - well, not that guilty. 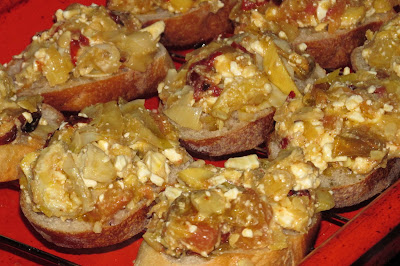 Friday night I sauteed some leeks and summer squash and fresh tomatoes and canned artichokes and a little white wine, thai basil and a sliced garlic clove. That was the base of a shrimp and scallop spaghetti squash dish that will be in the August-September Gainesville Magazine. I scooped some out before I added the seafood and put it in the refrigerator.

So tonight I cut 9 angled slices from a Vine rosemary baguette, dabbed one side with olive oil and baked them on a rack set in a roasting pan. While they were baking I stirred some crumbled feta and finely sliced oven-dried tomatoes into the leftover veggie mixture.

After the baguette slices were a lightly golden, I took them out, flipped them over and pressed a scoop of the reinvented veggie mixture on top of each. Brushed with a little olive oil and popped back in the over for about 20 minutes they were soon very hot and toasty!

Served with a nice brown ale and eaten on the porch while watching the rain - and no, no leftovers! 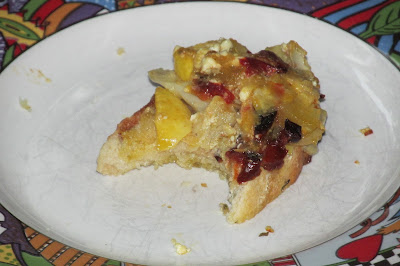