A recent trip to the Georgia Organics Conference in Athens, Georgia was an eye-opening experience to a foodie culture that we did not know existed in semi-rurual Georgia. We went to attend workshops and hear Carlo Petrini - we left with a respect (and a little jealousy) for what Athens has been able to accomplish by promoting, serving and savoring local foods.

Our first night in Athens was spent dining at Last Resort Grill - a hard choice made from a list of Athens restaurants that serve local food. We had a fabulous meal and a wonderful experience.

On to the Conference - I attended workshops about family dinners, farm-to-school programs, youth-led activism in New Orleans and a Cafe Campesino and Cooperative Coffees workshop about free trade coffee cooperatives and roaster cooperatives.

After a quick lunch of local green salads, veggie chili and cornbread (I was scandalized - there was sugar in all the cornbread!), and a long walk through the expo with more than 100 vendors with everything from vegetables seeds to casseroles to cook those veggies in, we were looking forward to a chance to relax at the Farmers Feast.

Rumors of the feast circulated as the day went on — more than two dozen chefs, local wine, lots of desserts — it was a good thing lunch was light. The most bizarre rumor turned out to be true — while everyone received the same starter, there were four different menus! We entered the ballroom and quickly moved through the burlap-covered long farm tables, looking for a “menu match.” It was a very hard choice, since they all sounded wonderful and there were at least one vegan and four vegetarian choices on each seven item menu.

While we got to know our table mates, the food parade began, with the chefs bringing out each table's seven dishes in family-service sized bowls and casseroles. 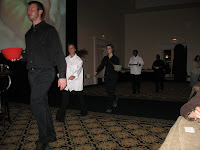 We passed the food and wine, chatting with our neighbors about flavors and seasonings. Greens and root vegetable were heavily represented due to the time of year, but their presentations were flavorful and innovative.

Dessert cannot be described, but I did lovingly videotape the groaning dessert tables.


The dessert parade was even grander than the entree parade.


Each table was presented with a cake by a chef who described and served the heavenly creation. 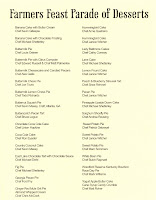 I must admit, while our table was served a luscious-looking Coca-Cola cake, I knew that somewhere in the room was that delightful Southern specialty, Hummingbird Cake - spice layers with a pineapple-fruit-cream filling. (It was the last cake pictured in the parade of desserts video.) I boldly took my slice of Coca-Cola cake and went in search of a trade. Across the room, a kindred spirit's eye's went wide when I flashed my cake and offered a trade for hers. Oh, was it worth the effort!

The conference was wonderful, the workshops excellent and enlightening, the atmosphere in Athens was welcoming and inspiring! And Carlo Petrini signed my copy of one of his books - 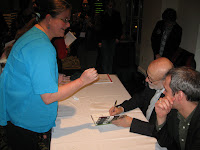 If you want to read more about the conference look in the March 2010 Hogtown HomeGrown
Posted by Stefanie Samara Hamblen at 10:47 AM