Text and photos by Erin Rauch, intern for Hogtown HomeGrown

With the help of master cheese makers, extensive research and community support, Florida now boasts three licensed artisan cheese dairies. In their new book, Summer of a Thousand Cheeses, Russ and Peg Hall describe artisan cheese as “produced primarily by hand, in small batches, with particular attention paid to the tradition of the cheesemaker’s art.”

Dairies across Florida are reintroducing the European artisan cheese tradition and expanding their presence in the local food market. “It was actually the more artisan cheeses that got us re-interested and made us think there was a story to be told,” Peg Hall said.

Russ and Peg Hall mention Winter Park Dairy, licensed in 2008 as the first raw milk cheese maker licensed in Florida, in their book. David Green, owner of Winter Park Dairy, learned how to make cheese at the University of Vermont. “Cheese is extremely complex,” Green said. “You need to learn the intricacies of making it.” Green makes Tomme and Bleu Cheese, both he described as uniquely natural rind cheeses. The rind is the outer shell of the cheese and is usually edible. He also said he hopes to make Gouda in the future.

Green said he likes the Bleu Cheese he makes because it’s alive and it has a lot of flavor. His Bleu Cheese, known as “Bleu Sunshine,” was the first raw milk cheese produced in Florida. “It is the freshest raw milk product that can be legally purchased,” according to their website, www.winterparkdairy.com.

Winter Park Dairy originated as a citrus farm. After a bad freeze, Green started the dairy. “Cheese isn’t seasonal and it’s not subject to plague or frost,” Green said. “It ages indefinitely, it just gets better.” Green milks eight cows, twice a day, with help from Leah Steele, an intern studying at the University of Central Florida, and he brings in milk from other dairies as well.

He sells his cheese at the Winter Park Farmers Market on Saturday mornings and at the Audubon Park Community Market on Monday nights. Green said the market for his cheese is only limited by the U.S. Postal Service. While he sells cheese as far away as Napa Valley, California, his commercial accounts include major hotel chains such as the Waldorf Astoria, Hyatt, Marriot and Hilton.

It was David Green and Winter Park Dairy that sparked John and Nancy Mims’ interest in artisan cheeses. The Mims have been in the dairy business for about 34 years. Their newest venture is Cypress Point Creamery, a cheese dairy on their farm, RexRun Farm in Hawthorne, Florida. John Mims built the cheese plant about a year ago in 2009.

“We were looking for something that added value, rather than just wholesaling all of our milk,” John Mims said. Cypress Point Creamery is a farmstead cheese manufacturer because they produce cheese using only the milk from their cows. With the help of hired workers, John Mims milks 160 cows, twice a day. 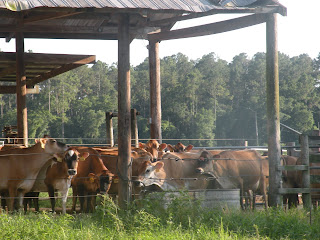 The Mims’ make cheese about once a week. They are currently making Gouda, Havarti and Tomme because people recognize their names and love their taste. By law, raw milk cheeses have to age for a minimum of 60 days in order to be sold for human consumption. Their first venture, Gouda, should be ready to sell soon. “It’s just a mild, white cheese,” John Mims said. “It melts well and has a good creamy texture.” 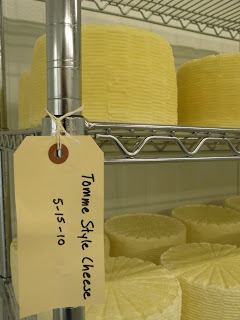 While they wait for their cheeses to age, they enjoy the fruits of their labor with almost every meal. After positive reactions from friends and neighbors, they said they are looking forward to selling their products at market soon.

Another Florida cheesemaker is Wainwright Dairy in Live Oak, Florida. They produce Grade A Pasteurized, non-homogenized milk and all-natural cheeses. The Wainwright family has been in the dairy business for over 30 years, according to their website, www.wainwrightdairy.com. They were the second licensed raw milk cheese maker in Florida.

Chris Campbell, manager at the dairy, said they just built a cheese plant and a bottling plant. They currently make cheese twice a week, according to their website, and it can be found for sale at local retailers. The different varieties they produce are Colby, Pepper Jack, Baby Swiss, Cheddar and fresh Cheddar curds.

It was Cheddar cheese that was the main part of Russ and Peg Hall’s family cheese roots since they grew up in New York. One of the Hall’s first experiences with artisan cheese was in Florida. As they wrote their book, Russ Hall said their biggest discovery was the new cheese makers in Florida.

The Halls describe the significance of the bond between cheese, cheese maker and customer in the book Summer of a Thousand Cheeses. “It’s kind of like a little partnership,” Russ Hall said. “You know the cheese is good, clean and fair because you know where it came from.”

Summer of a Thousand Cheeses shares the Hall’s adventurous discovery of the new American cheese and the book can be purchased online at www.lighthallbooks.com. The Halls “want to share the fun we had doing it,” Russ Hall said. “We want people to enjoy and learn things along the way.”

While there may be only three raw milk artisan cheese producers in Florida, the variety is amazing. “We are all doing different styles with different herds and techniques,” David Green, owner of Winter Park Dairy, said. “It’s a good thing.”